This week was my Tidy Tuesday debut! Tidy Tuesday is a weekly data project which is aimed at R users who want to practice their wrangling and visualisation skills within the tidyverse. This week’s data set features a historical record of rocket launches, and formed the basis for the article “The space race is dominated by new contenders”.

My goals for this week were to:

I won’t focus on the details of the data wrangling in this post. I recommend you watch David Robinson’s excellent Tidy Tuesday screencast, where I picked up some cool tricks. One that I would like to highlight, and that I will definitely add to my toolbox, is the use of fct_collapse and fct_lump from the forcats package. It allows us to easily collapse several factors into manually defined groups. To see how this works, first consider the unprocessed data:

The table above shows the number of launches by nation. Some of these are actually not nations (such as I-ESA, which represents the European Space Agency). We will deal with these shortly. Given the table above, we would like to:

The following chunk shows how to do all of the above:

Pretty cool! Anyway, on to the visualisations. Following Robinson’s screencast, I ended up with the following plot: 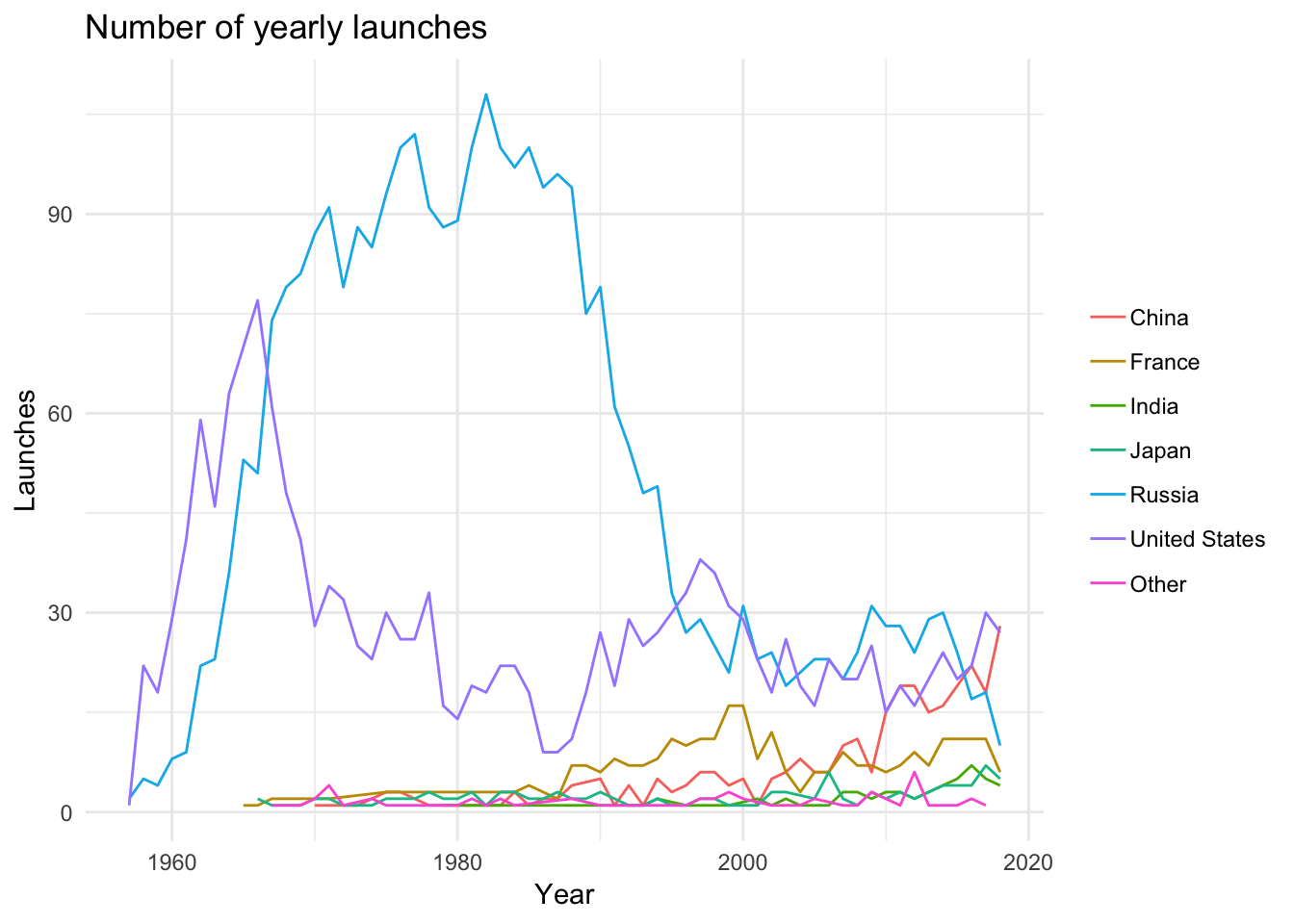 The next step was to use gganimate to liven things up a bit. Following the time series example from the gganimate documentation, I ended up with the following:

Now we’re talking! Next, I wanted to define a relatively general function that allowed me to use the same framework to visualise the growing influence of the private sector in space travel. I would also like the option to set a lower bound for time period I’m interested in, and I would like to be able to specify which countries I’m interested in plotting. Using tidy evaluation, I ended up with the following:

Now I can call launches_per_year with different arguments to generate different plots. For instance, we can see how the private sector gets increasingly involved in space flight…

… or we could look at the same plot for the last 20 years instead.

I was also interested in the yearly success rates of nations and agency types (public/private/startups). Again, building a relatively general function allows me to explore different options:

For example, if I want to plot the learning curves (if you will) of the American and Soviet/Russian space programs, I can do the following:

Note how the size of the points shrinks and expands. The size is relative to the number of launches for a given year, adding an extra dimension to the visualisation. Also note the abrupt dip in the number of successful American launches in 1986. This is a consequence of the Challenger disaster on January 28, which dealt a significant blow to the US manned space program.

That concludes this week’s Tidy Tuesday. Thanks for reading!